Following our successful collaboration on a new mallet quartet in 2017, Atomic Atomic, Clocks in Motion continues its ongoing relationship with composer Andrew Rindfleisch. Rindfleisch just completed his second composition for Clocks in Motion, a massive 30 minute percussion quartet with a vast collection of instruments entitled Chroma. Rindfleisch is currently working on a new marimba solo with more potential projects in the future. 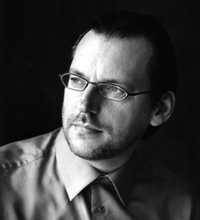 Composer Andrew Rindfleisch (b.1963) has enjoyed a career in music that has also included professional activity as a conductor, pianist, vocalist, improviser, record producer, radio show host, educator, and concert organizer. As a composer, he has produced dozens of works for the concert hall, including solo, chamber, vocal, orchestral, brass, and wind music, as well as an unusually large catalog of choral music. His committed interest in other forms of music-making have also led him to the composition and performance of jazz and related forms of improvisation.

Mr. Rindfleisch is the recipient of the Rome Prize, a John Simon Guggenheim Fellowship, the Aaron Copland Award, and the Koussevitzky Foundation Fellowship from the Library of Congress. Over forty other prizes and awards have followed honoring his music. He has participated in dozens of renowned music festivals and has received residency fellowships from the Bogliasco Foundation (Italy), the Czech-American Institute in Prague, the Charles Ives Center for American Music, the June in Buffalo Contemporary Music Festival, the MacDowell Colony, and the Pierre Boulez Conductor’s Workshop at Carnegie Hall. He holds degrees from the University of Wisconsin at Madison (Bachelor of Music), the New England Conservatory of Music (Master of Music), and Harvard University (PhD).

As a conductor and producer, Mr. Rindfleisch’s commitment to contemporary music culture has brought into performance and recording over 500 works by living composers over the past 20 years. He has founded several contemporary music ensembles and currently heads the Cleveland Contemporary Players Artist in Residency Series at Cleveland State University, and the Vertigo Ensemble at the Utah Arts Festival in Salt Lake City. He has made guest conducting appearances throughout the United States and abroad with many diverse musical organizations; from opera and musical theatre, to orchestral, jazz, improvisational, and contemporary avant-garde ensembles.